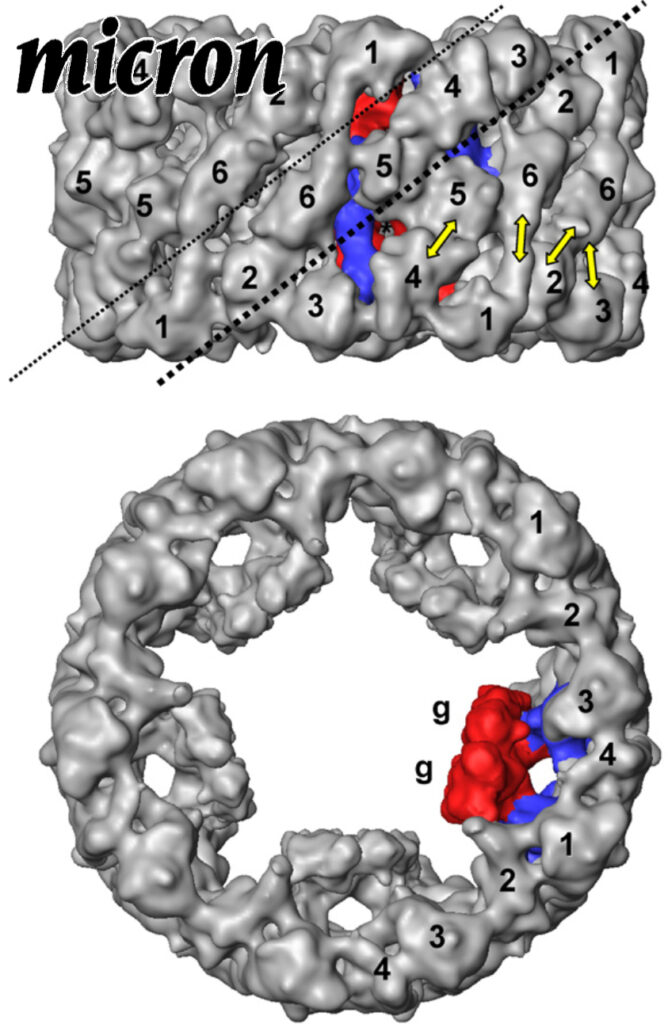 Hemocyanins are giant extracellular proteins that transport oxygen in the hemolymph of many molluscs. Molluscan hemocyanins are cylindrical decamers or didecamers of a 350–400 kDa subunit that contains seven or eight different covalently linked globular functional units (FUs), arranged in a linear manner. Each FU carries a single copper active site and reversibly binds one dioxygen molecule. As a consequence, the decamer can carry up to 70 or 80 O2 molecules. Although complete sequence information is now available from several molluscan hemocyanins, many details of the quaternary structure are still unclear, including the topology of the 10 subunits within the decamer. Here we show 3D reconstructions from cryo-electron micrographs of the hemocyanin decamer of Nautilus pompilius (Cephalopoda) and Haliotis tuberculata (Gastropoda) at a resolution of 11 Å (FSC1/2-bit criterion). The wall structure of both hemocyanins is very similar and shows, as in previous reconstructions, three tiers with 20 functional units each that encircle the cylinder wall, and the 10 oblique minor and major wall grooves. However, the six types of wall FUs of the polypeptide subunit, termed a-b-c-d-e-f, are now for the first time individually discernable by their specific orientation, shape, and connections. Also, the internal collar complex of the decamers shows superior resolution which, in this case, reveals striking differences between the two hemocyanins. The five arcs (FU-g pairs) of the central collar (in both hemocyanins) and the five slabs (FU-h pairs) of the peripheral collar (only present in Haliotis hemocyanin), as well as their connections to the wall and to each other are now more clearly defined. The arc is attached to the wall through a feature termed the anchor, a previously undescribed structural element of the hemocyanin wall.